From time to time when I would get into a situation where I couldn’t avoid a conversation with my Dad, he would ask me what I was doing with my time, if I was being “productive”. He had some nerve. It would absolutely shame him to know how hard I work, day in and day out, at what I love to do, was always my thought. But acting would be my secret—the one thing I would never admit to him. His mere presence was enough to rob anyone of joy and I was never going to let him desecrate my sanctuary. I believed him to be so obtuse that he would never come to understand the opportunity that I have to become one of the greatest actors of our time. So, anytime he’d ask me what I was studying at school, I’d tell him, “public speaking”. That seemed to rest easier with him as he had a deep penchant for politics; I knew that was the closest to the truth that I could get with him.

Oddly enough, when I went to Seoul, Korea in 2016 for the first time in my life to join Seoul Shakespeare Company as Prince Florizel in their production of The Winter’s Tale, I reconnected with old relatives and among the stories they regaled to me was how Dad once pursued a career in acting. He had even been involved in a major movie production. “그 아비에 그 아들—Like father, like son,” they laughed. But for their generation in Korea, filial piety took precedence and he was eventually forced to give up his dream in order to emigrate to the US and start a family in an arranged marriage. I was dumbstruck by this revelation. I would never have pegged my father—the abusive, irrational, egotistical, perverted addict that I would try to avoid at all costs—to have ever had any greater desire in life than to read the newspaper, pontificate to me on how a “normal” person should behave, indulge in his Internet vices, or to even leave the confines of our house. As much as I vowed to never be like him, it confounded me that somehow, in some way, I was him and that we had been keeping the same secret from each other all along.

For the entirety of my adult life, I told myself that I’d never be like him. Someone once told me, “You cannot change what you are willing to tolerate.” I.e. if you’re willing to tolerate being overweight, you will be overweight; if you can tolerate mediocrity, you will be mediocre. Indeed, growing up around my Dad, I acquired early on a deep-seated conviction that I’d never tolerate my father’s traits in myself. That meant that my modus operandi would be the antithesis of everything he represented to me. I would be kind, respectful, and sincere to everyone around me; I would protect women from abuse; I would be the hardest worker that I know; I would make nutrition and exercise the cornerstone to all my endeavors; most of all, I would practice what I preach. In my estimation, my father existed to show me exactly what not to do, who not to be like. I took pride in my belief that I was going to be nothing remotely like him. But yet, here I am, following in his footsteps, continuing where he left off—where he had given up on his dreams.

To his credit, he had some novel ideas, like launching a health food company in order to bring to market our family’s cancer-fighting ginger/ACV recipe (which I have since adopted as a personal goal for myself). But because my father was so driven by financial gain, I never wanted to empower him to become any more than what he was. I decided that his dreams were not mine and if I were running the show it would be a selfless venture to help heal the world. He’d often lash out and deride me for not wanting to help him, relegating me to that of a worthless son for “defying” his commands to help him write his business letters (among many other burdensome tasks).

One night in 2014 (before I started acting), I had gotten home from work as the IT Audit Manager at Bloomberg and told Dad I was too tired to talk and went to my room. He chided me and worked himself up into such a fit that he threatened to call the police on me for not wanting to discuss his business plan with him. I tried desperately to ignore him but his steroid-fueled rage went on. He made good on his threat and when the police finally arrived I came out of my room and there we all were in the kitchen at wit’s end.

“What seems to be the problem?” asked one of the officers.

“He won’t listen to me!” my Dad blurted out, and shot them a look like, tell my son to obey me! He had an honest exasperation about him as someone who truly did not grasp Western culture. He might have gotten some sympathy in Korea but the memo here clearly states that this is the land of the free.

The officer turned, looked at me seated at the table—still in my work suit—and asked me point blank, “How old are you?”

“Guy, you gotta move out.” Both officers chuckled at the absurdity of the situation.

Yes. Of course I had to move out. I needed to get as far away from my Dad as humanly possible, in fact. 6000 miles away, on the other side of the planet would be just perfect, thank you. But my recent separation from my ex-wife left me emotionally broken and fiscally in shambles. Before I could manage another leap, I needed a place where I could recover from my losses, and regain my balance and sanity. Home turned out to be one hell of a place to try and do that.

In the end, perhaps it is my why that separated me from my father. It’s said that when your “why” is strong enough, you’ll figure out any “how”. If you have to ask me why I do any of the things that I do, I’d say that it’s to topple the pharmaceutical industry, whose drugs debilitated my sister at the tender age of four and from which complications from a misdiagnosis eventually took her from me when I was 17—she was 20. My how is to make my films and my craft of acting the weapons that I will take to battle my Goliath. I’m a freedom-fighter out to even the score and in doing so, I will inspire others to take control of their own health and to bring awareness to the deadly pitfalls of prescription medication. To this day, I don’t know what my father’s why was, or if he ever really had one.

Dad finally passed in the home he built for us on May 15th, 2017 after a 30+ year-long battle with Type 2 diabetes. I took the first flight back from Seoul after my final show to be with him in his final two weeks. Bedridden and semi-coherent, it was clear to me that the window of opportunity for a heart-to-heart confessional had long since passed. I could have finally divulged to him my penchant for acting and told him how deliriously fun it was to finally be on stage in my first public theatre performance but it just didn’t make sense to raise his ire anymore; the unspoken would have to be left unspoken.

In was only after his passing that I was finally able to grasp the magnitude of his sacrifice for me. That his existence, once a thorn nestled deep within my amygdala that inflicted repeated blunt force emotional trauma, was to be my ultimate lesson in navigating the rivers of life, guiding me to the confluence of humble service to others and a passion-filled life. I would not be where I am today if it weren’t for his gift. All that I have done and all that I will do shall be in memory of him.

It just so happens that in my pursuit of the science of the microbiota, I have stumbled upon a new theory, something I believe to be critically important to actor’s training that involves cultivating and harnessing the creative power of the superorganism that lives within all of us, our gut microbiome. I would love to present a thesis on how the health of our gut bacteria, modulated through diet and exercise, directly affects our ability to act and perform freely on-stage.

I would interview many of the top performers in theatre and film and discover their philosophy on nutrition, exercise, and the gut microbiome. It could evolve into a web series with a format like Inside the Actors Studio, but with a deep dive on wellness, nutrition, and fitness.

Finally, all my endeavors in acting and filmmaking would culminate in a run for mayorship of NYC. I have a plan to make New York the healthiest city in the world by leveraging film/television to promote my wellness initiatives, and blockchain technology for the distribution of locally-grown, vertically-farmed agriculture (I was a finalist in the BNP Paribas Blockchain Elevator Pitch Contest in 2015). I may not be able to solve income inequality overnight, but I know that with the gifts that have been granted to me I can help make tremendous strides in improving the health and happiness of all NYC residents. 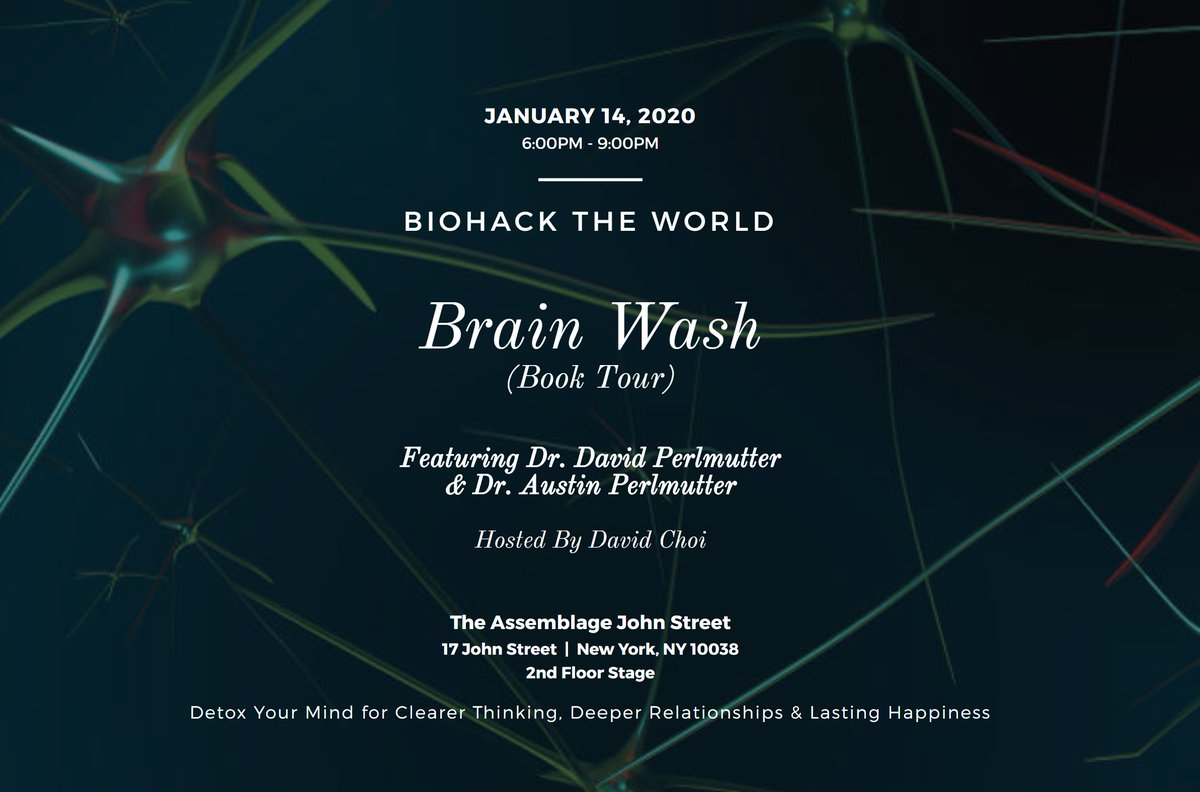 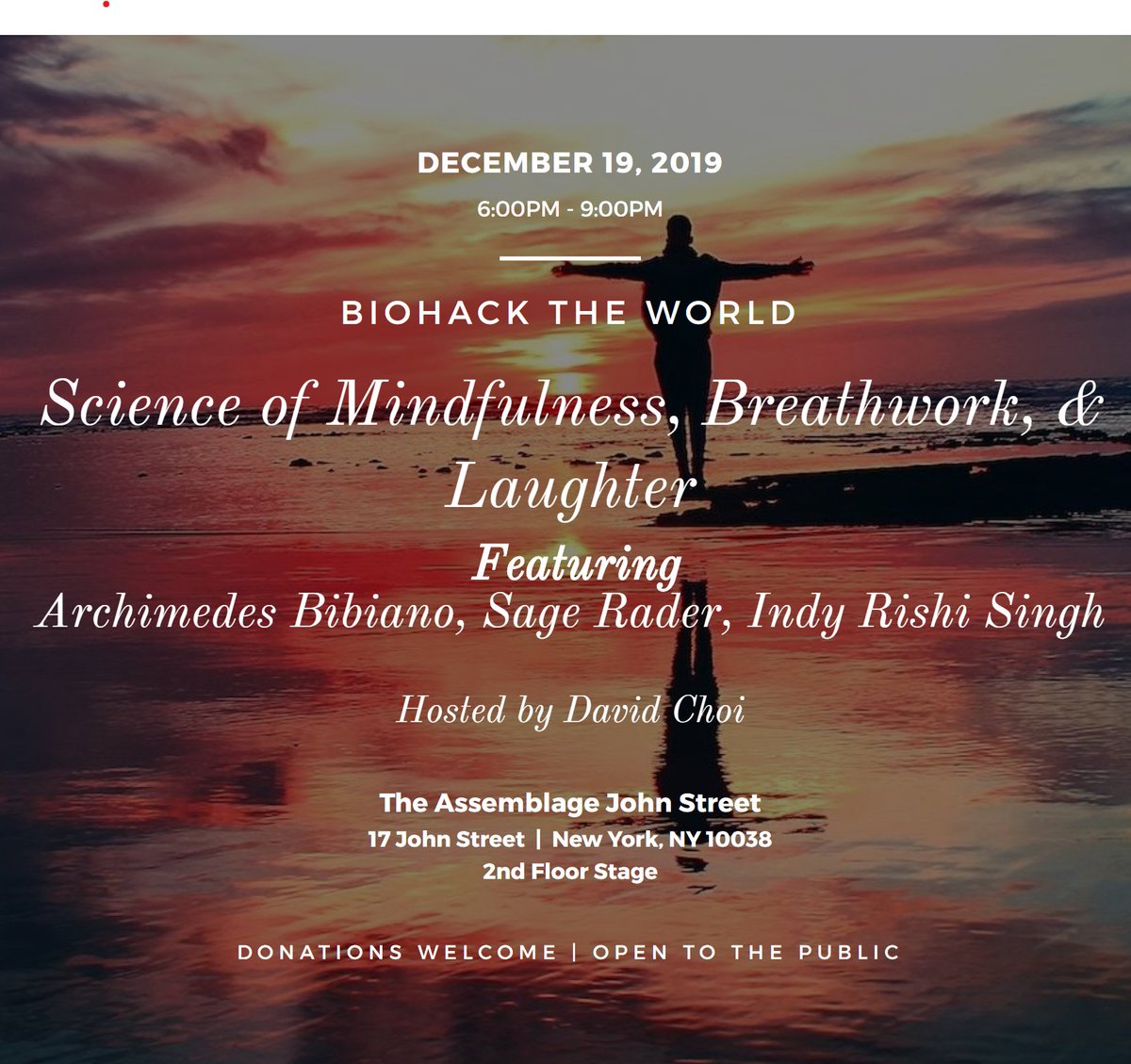